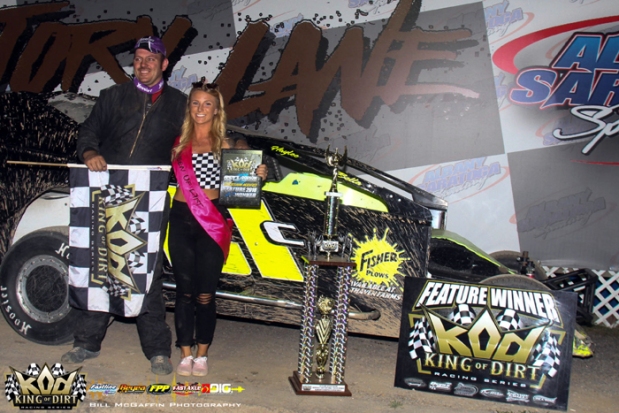 September 8, 2018 (Malta, NY) – If they were to make a movie about the 2018 Northeast Crate Nationals at Albany Saratoga Speedway, it just might be called Racecar; A True Underdog Story. It would feature Brian Calabrese as Peter LaFleur, Rocky Warner as Patches O’Houlihan, Connor Cleveland as Gordon Root, and Tim Hartman Jr. as White Goodman, with ESPN The Ocho doing a 30 for 30 on Calabrese claiming the Nationals win despite incredible adversity.

Two title holders emerged from the Northeast Crate Nationals; both to the delight of the crowd on hand at Albany Saratoga Speedway when Brian Calabrese pulled off a monumental upset to win the Nationals Title, while Connor Cleveland secured his second King Of Dirt Sportsman Modified Championship.

Next on the track for the King Of Dirt Racing Northeast Crate Nationals were the Mayhem Motorsports Qualifying Mains worth a smooth $100 bonus to win. Dave Constantino, Chad Edwards, and David Schilling collected the bonus cash and locked themselves into the A-Main redraw.

Adirondac Leather consolations were up next with Rob Maxon and Justin Severance taking the wins. Also qualifying for the A-Main were Paolo Pascarella, Steven Kneer, Derek Bornt, and Mike Ostrander. Once the provisional starters were set, it was time for the 100 Lap Northeast Crate Nationals A-Main.

David Schilling and Brian Calabrese would bring the field to the green flag, with the former KOD tour winner Schilling taking the early race lead. Calabrese would shuffle back a bit early on, as Connor Cleveland, Andrew Buff, and Tim Hartman Jr. quickly made their way by to battle for top five positioning.

Scott Duell made an early pass on Calabrese for the 6th position leaving the 21c to fend off former Nationals champion and KOD title contender Chad Edwards in a heated battle for the 7th position.

The racing was hot and heavy everywhere on the track. David Constantino, Joey Scarborough, Michael Coffey Jr., and Robert Bublak Jr. were locked in an early race battle for top 10 positions.

The race went 45 laps with door-to-door action, including a three-way battle for the top spot in traffic between Schilling, Cleveland, and Hartman Jr. before the first yellow of the race slowed the field. Scott Duell had a bad fast racecar, but slowed in turn four with a flat tire.

On the restart Cleveland made his move taking the race lead from Schilling and bringing the 22 of Hartman Jr. with him shortly thereafter. Behind them a bit Buff, Constantino, and Calabrese were engaged in a three deep battle for 5th, 6th, and 7th positions with Edwards not far back in 8th.

Another yellow flag flew for KOD title contender and two-time tour winner Michael Sabia who was collected in an accident in turn four with Justin Severance. Sabia would return to the track and continue putting on a show for the Dirt Rush film crew from Whitney Productions who were on hand filming his episode for Season 2 of the show.

On the restart Cleveland went back to the lead, but Big Time Little Tim was all over the 09 who was not only looking for his first Nationals title, but his second King Of Dirt Racing Sportsman Modified Championship as well.

Rob Maxon had an interesting moment on lap 69 when Mr. Crate Track USA got over the cushion in turn one and flipped over one time and landed on his wheels. He’d fire the car back up, drive away, and finish the race 17th respectively.

On the restart Tim Hartman Jr. began pressuring Connor Cleveland for the top spot hard even swapping the spot, before Hartman secured the lead on lap 75. At the same time Bublak Jr. had reached the top five, while Calabrese had quietly moved his way back into the top five running 4th after Schilling slid over the cushion in turn two.

In the closing stages of the event Hartman Jr. made an uncharacteristic mistake going over the cushion in turn two and when he did Cleveland, Calabrese, and Bublak Jr. slipped by. At that point everyone in attendance thought Connor Cleveland was going to win his first Nationals title to clinch the KOD series title, but Brian Calabrese had other plans.

Hitting his marks and running a consistent line Brian Calabrese was able to close on Connor Cleveland for the top spot and on lap 87 he made his move off turn two taking the lead. Cleveland would push harder to regain the lead, but Bublak Jr. was on his heels and made the pass to grab 2nd.

With five laps to go Bublak began closing on Calabrese for the top spot and on the white flag lap drove under the 21c headed into turn three, but couldn’t complete the pass. Brian Calabrese shocked everyone by winning the 9th Edition of the Northeast Crate Nationals at Albany Saratoga Speedway.

“This is incredible. This is what dreams are made of. I can’t believe I just won the Nationals. I saw the white flag and lap traffic was right in front of me. I was waiting for someone to go past me and I saw Bublak’s nose, but he didn’t have the room to make the pass,” said an enthusiastic and teary-eyed Calabrese.

By virtue of his 3rd place finish Connor Cleveland clinched his second King Of Dirt Racing Sportsman Modified championship. Jeremy Pitts who came from 26th to 7th, Kevin Chaffee, who came from 28th to 9th, and Paolo Pascarella who drove from 20th to 10th turned in other noteworthy performances.

A special moment prior to racing activities in victory lane included Connor Cleveland, Dean Seelow, along with Kaitlin Bowman and family. If you remember previous articles, Bowman is defying the odds of Batten’s Disease and just celebrated her 13th birthday; a number she wasn’t expected to reach.

Newcomer Of The Race – Brian Calabrese