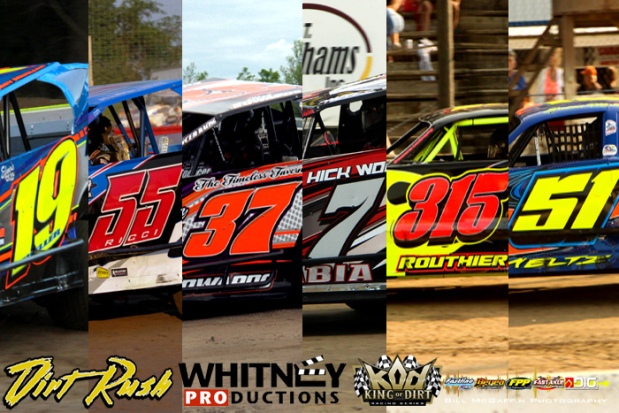 April 1, 2018 (Fonda, NY) – During the 2017 racing season drivers and fans saw cameras at times mounted to or following drivers during the King Of Dirt Racing tour. An idea pitched from KOD promoter Rob Hazer to Whitney Productions owner David Whitney spawned a wildly popular reality show called Dirt Rush, which is preparing for season two and a whole new crop of drivers.

Season one drivers were entertaining, educational, and controversial. The show hit the ground running in October with the release of 358 Modified driver Matt DeLorenzo’s adventure on the KOD Small Block tour at Devil’s Bowl Speedway, which currently ranks as the most popular episode with just around 30,000 views.

Episode two-featured five-time Lebanon Valley Speedway track champion Jeff Watson, as he ventured out on tour for the first time in his career. Watson followed the King Of Dirt Racing Sportsman tour and during filming of his episode by Whitney Productions, he became the first driver to win in front of the Dirt Rush Cameras. His episode was released in November and currently has around 10,000 views.

Episode three featured the loveable flying farmer also known as 358 Modified driver Jason Herrington. Herrington calls the high banks of Lebanon Valley his home and was the only Small Block driver to earn podium finishes in both tour stops at the valley of speed. His episode was released in December and sky rocketed in views, which currently boasts around 14,000.

In February fans were treated to Episode four, which featured former Award Of Excellence recipient Jason Casey and a friendly bunch of Pro Stock drivers that travel together. Casey and his father Jay travel with friends and fellow competitors Jon Routhier and Rich Crane and host a fun crew to view. Casey’s Episode of Dirt Rush produced by Whitney Productions currently has gained 6,000 views, but valuable notoriety for the full-fender racer.

Perhaps the wildest show of Season One came in March with the release of Episode five featuring Scott Duell. The high side hustler entertained the cameras with teammate Brian Pessolano until a flip in the feature ended his evening. Not the outcome Duell was looking for, but a compelling episode nonetheless. Currently Duell’s episode has just over 8,000 views and can be found along with all other episodes via social media on King Of Dirt Racing Facebook pages or YouTube channels.

With only a pair of Episodes left for Season One including Robbie Speed and a recap episode featuring all drivers, it was time to plan Season Two of Dirt Rush. With the only real criteria for the show being reserved for tour regulars, members of the ‘think tank’ brainstormed 12 names down to six to feature next fall.

Allison Ricci is widely popular driver who has had success both on and off the track. She is the most recent recipient of the KOD Award Of Excellence and an opportunity to race with her short track legendary father provides an opportunity that can’t be missed.

Jessey Mueller has earned two nicknames in his short time on the dirt. Some call him the heavy hauler and some call him Iron Man. Whatever nickname thrown his way he’s got the flamboyancy and an entertaining crew made for television. Surely this will be a Dirt Rush episode to remember come next fall.

Chad ‘Lunchbox’ Edwards has twice challenged for the KOD Sportsman title, but came up just a few points short. Together with his legendary car owner Tom Spencer, they’ve put together a championship effort for 2018. With a colorful crew, an eager driver, and championship car owner this team will be entertaining to follow.

Mr. Excitement Michael Sabia never disappoints. He’s edgy, outspoken, and entertaining. That’s TV gold for Dirt Rush and Whitney Productions cameras. Sabia is another title contender and is a two-time Mr. Crate Track USA champion. To get the best value for his time, Dave Whitney will film Sabia and the Redline Graphics team out of their element in 2018.

Jon Routhier and Jason Meltz proved they’re an entertaining bunch both on and off the track. Currently the plan is the first ever duel driver episode featuring both these full-fender Pro Stock pilots. Routhier is in search of his first title at Lebanon Valley and Meltz is entering only his second season in the Pro Stock division. It will be a must see episode for all race fans next fall when Dirt Rush returns.

When the process began to find the cast of drivers for Season Two there were 30 in the running. It was narrowed down to 12 and then six were hand picked by Dirt Rush producers and creative directors. Whitney Productions took an idea proposed by King Of Dirt Racing and knocked it out of the park. Congratulations to those drivers selected for Season Two and good luck to all drivers throwing down for the crown this coming summer.