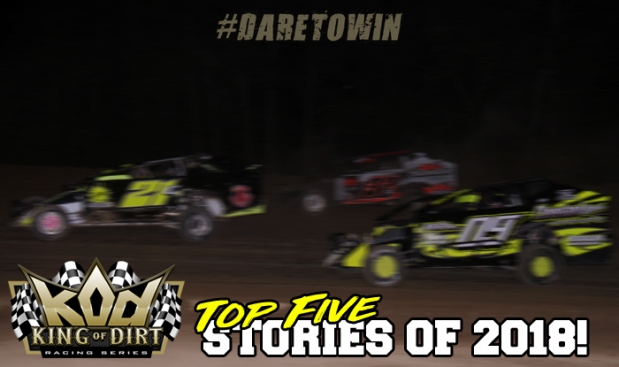 January 1, 2019 (Fonda, NY) – Welcome to 2019 race fans. Today we ring in the new year with a Race Pro Weekly inspired look back at the top five stories of the 2018 King Of Dirt Racing season, which was full of championship runs and surprising victories. Let’s kick things off with our #5 story of last season.

#5 KOD Story Of 2018 – Demetrios Drellos has been ultra competitive on the King Of Dirt Racing 358 Modified tour for the past two seasons. The young gun is currently tied for the top spot for all-time top five finishes on tour, but his biggest accomplishment came on July 29th when he battled by Rocky Warner then stormed past eventual tour champion Bobby Varin to pick up his first career KOD Small Block victory in the green mountain state at Devil’s Bowl Speedway. Click the link below to revisit an exciting night for the 111 Motorsports team.

CLICK HERE to read about Demetrios Drellos big win on the KOD 358 Tour!

#4 KOD Story Of 2018 – Josh Sunn has had multiple top five finishes while racing King Of Dirt Crate Modified events, but his best performance came close to home in Vermont at Devil’s Bowl Speedway when he found himself locked into a battle with the hall-of-fame 115 of Kenny Tremont Jr. The pair would swap the lead bringing fans to their feet until the end when Sunn found himself victorious in one of the most exciting races in tour history. Click the link below to read about Josh Sunn’s triumph.

#3 KOD Story Of 2018 – When any kid begins their career cheering on their father at the track they dream of one thing; to one day visit victory lane and make them proud. In September Ricky Davis III took advantage of good starting position and held off the challenges of Allison Ricci and Ronnie Johnson to not only win his first career KOD Small Block event, but his first career Modified race ever. Click the link below to re-visit an epic underdog story where the Capital District’s RD3 found victory lane at Lebanon Valley Speedway.

#2 KOD Story Of 2018 – Mr. Crate Track USA has been a race drivers want to win each year the King Of Dirt Racing Crate Modified schedule comes out. For Rob Maxon that was the story, but his victory earned him more than he bargained for. Maxon found himself racing his way to the front and victorious, but couldn’t celebrate until a few days later when his motor that was pulled deemed 100% legal by Hunt’s Machine Shop. Score another one for the underdogs in 2018. Click the links below to read about Maxon’s Mr. Crate Track USA title run in the valley of speed.

#1 KOD Story Of 2018 – The top story of the 2018 King Of Dirt Racing season should be no surprise, because it was the shock heard round the world. Brian Calabrese had been steadily improving, but in all reality nobody thought he’d pass the likes of Chad Edwards, Robert Bublak Jr., Tim Hartman Jr., and two-time KOD Crate Modified champion Connor Cleveland to win the biggest race of the year.

When Calabrese won the Northeast Crate Nationals at Albany Saratoga Speedway he made his name known and his presence felt. Another epic underdog victory on the KOD tours in 2018. Click the link below to read about Brian Calabrese pulling off the number one King Of Dirt Racing story of the 2018-racing season.

Honorable Mention Jason Casey – Jason Casey has been a force on the King Of Dirt Racing Pro Stock tour since 2015. The Multi-Time tour award winner had his best season during the summer of 2018 where he picked up an intense win at Albany Saratoga Speedway and dominated Lebanon Valley for an emotional victory on his way to the tour championship. Revisit Jason’s winning stories by clicking the links below.

Honorable Mention Rich Crane – We’d be re-missed not to mention a couple honorable efforts on the King Of Dirt Racing tour in 2018 continuing with Rich Crane’s dominant win at Utica Rome Speedway for his first Pro Stock Series victory. Crane led all 40 laps en route to the triumph. Click below to read about Crane’s victorious efforts at Utica Rome.

Honorable Mention Billy Dunn – When you think of winning streaks in racing Bobby Varin’s name pops up. He won three in a row on the King Of Dirt Racing 358 Modified tour, but when he got to Utica Rome on July 1st Billy Dunn had other plans. Dunn driving the Slack owned 3rs raced hard and by the end of 40-laps had broken Varin’s streak. Click the link below to read about Dunn’s streak ending victory.

There are so many great stories during a racing season it’s truly hard to narrow them down to just a handful. There are sportsmanship stories, victory stories, and heartbreak stories, but all are chapters in the 2018 season record book.